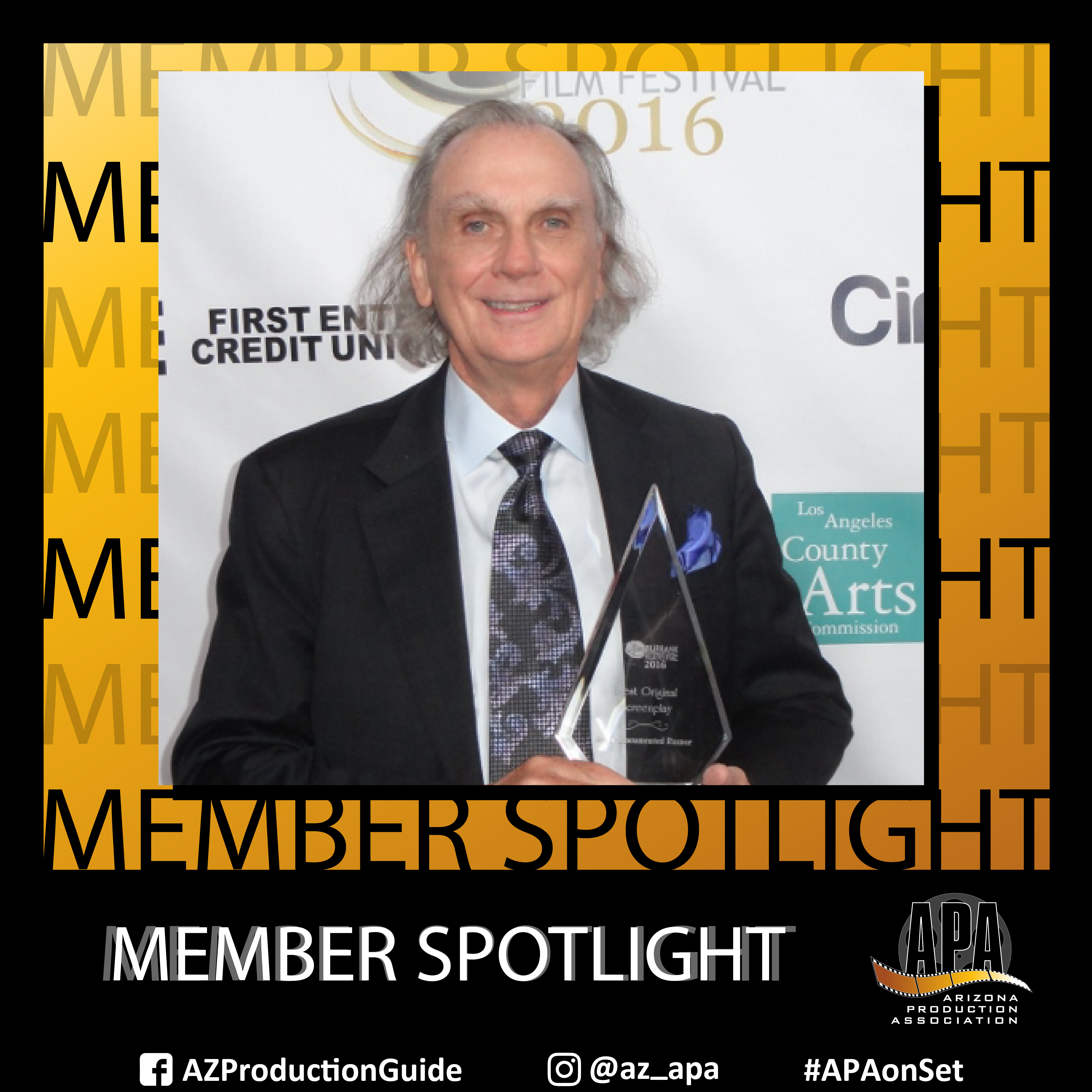 * What is your professional background (major job positions you've held and where)?

I've been writing screenplays for decades. Over the years I have written a series of work-for-hire projects. In addition to shopping my own scripts I currently work as a consultant with a production company and film financier in London as a script doctor and writing coach on screenplays in development.

The first hook The Industry lured me with was a chance to be in Hawaii 5-0 (the Jack Lord era) while stationed on a naval ship in Pearl Harbor. Operational priorities changed our ship's participation, though we did end up in the background of the episodes establishing shot. I felt the yearning to work in film from that moment on.

Later, I was writing a fiction novel when a friend encouraged me to write my novel as a screenplay instead. The first draft of the second screenplay I wrote I submitted to the Nicholl Fellowship where it placed as a Quarter-Finalist. I needed no more encouragement. I was off to the races. Since then, I have written scores of award-winning screenplays across pretty much every genre there is to write. And by the way, I have ten feature length scripts (at least) good to go that are set in various locations throughout Arizona. A biopic about an amazing historic scientific discovery that took place in Arizona... or a western (got a couple)... a romcom... an evocative border story.

From that moment on, I've pounded the proverbial pavement writing, pitching, and combing all available resources for screenwriting jobs. I worked and still work the festival/competition market for all its worth. As a writer, it's rare to have a spec script outright purchased and produced. More, spec screenplays serve as calling cards for consulting or contract work.

When several short scripts went into production, I was invited on set and have cultivated a strong skill set so that I am useful presence beyond being at the ready for a script change.

MIRAGE AT ZABUL PROVINCE - A short film produced in 2013. I was hired for this project from a Linked In group. The director of this film, Nathan Bettisworth, needed a solid script crafted for a thesis project based on a war scene he had in mind. He possesses a strong sense of story. As a result, we had many hours long chats by phone (on landlines, no less) discussing the intricacies of plot, story logic and more, how to write something that an actor could wrap around and nail the performance. These were fabulous conversations. This short ended up in competition in an Oscar-Qualifying film festival. As a writer, when a film of fabulous production value, shot in Panavision, and with phenomenal actors hits the screen, Nirvana arrives.

ZAP! - A short film produced in 2020 - This was a fav as it was my directorial debut. Keeping all the moving parts in play with the dexterity of a juggling octopus was challenging, inspiring and ultimately fulfilling.

Unnamed Feature Project - Likely in production in 2022. This project that I cannot yet mention by name or story is one where I'm working as a coach for a film financier who caught the screenwriting bug (it's more contagious than a coronavirus variant). He and I met on an industry social media site and took quite a liking to each other. We initially worked on a biopic where rights became too sticky to navigate, so we shifted to a narrative feature. This story is quirky, timely and will have global four-quad appeal. We Zoom regularly passing screenplay drafts bank and forth. I thoroughly enjoy this working relationship and it inspires my own writing.

Arizona is an "only place on Earth" location - the diversity of our multiple climate zones gives something for virtually any film (except a tropical beach). Our weather is amazing. We have solid, competent crew members.