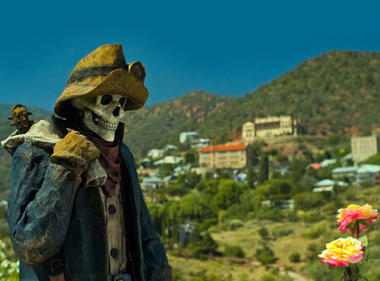 Now known as one of the most original and adventurous film festivals on Earth and listed in MovieMaker Magazine among the Top 25 Coolest Film Festivals in the World, the 7th Annual Jerome Indie Film & Music Festival returns Sept. 26 - 29, 2019.

Guests who attend this festival will be blown away by the unique and adventurous film experiences offered,  which include films on a train, films in Jerome residences, films at Spook Hall, at the Jerome Fire Station and Caduceus Cellars, and a silent film showcase with a live orchestra in the old Bartlett Hotel. Guests who love the film The Big Lebowski will get a special treat as The Jerome Indie Film & Music Festival is holding a Big Lebowski-themed costume party on Saturday, September 28, at Spook Hall from 9:00 pm until midnight.

With purchasing options ranging from a single event ticket of $15 to an all-inclusive ultimate VIP experience for $530, the festival has something for everyone. The film lineup and full listing of events is being continually updated, so please visit jeromefilmfestival.com or follow the festival on Facebook or Instagram for news and announcements.

Resident of Jerome Toni Ross founded the Jerome Indie Film & Music Festival in honor of her second child, who passed away unexpectedly at seven months of age. Of the motivation behind her founding the festival, Toni said, “I so dearly love the Jerome artistic community and wanted to create something good from this tragedy in my favorite town. Every year it is my honor to present the Rising Spirit Award to the most inspired film or individual of the festival, in honor of my beloved Trey.”