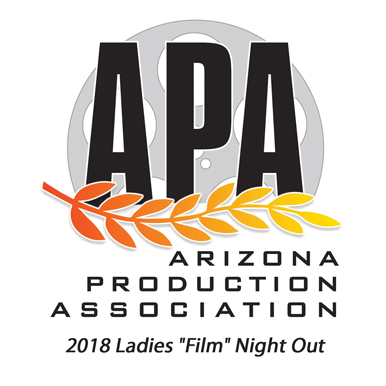 Join local film and media professionals and film aficionados at the 5th annual event celebrating female filmmakers in Arizona, “Ladies ‘Film’ Night Out”! This year's popular film event will be held on Friday, November 16, at the Scottsdale Center for the Performing Arts in Scottsdale, Arizona!

We're excited to announce that this year's event features a special guest speaker - Producer Amanda Melby, whose recently completed feature film, "Raising Buchanan," was shot in Arizona with local cast and crew. Amanda will speak on "Making the Leap from Short to Long Format," highlighting the differences between short films and features - which go way beyond the length of the finished product!

Be sure to join us in the spacious lobby for socializing and networking with a hot and cold appetizer buffet from 5:30 to 7:00 pm (buffet included with purchase of event ticket; cash bar available). Then head in to Stage 2 at 7:00 pm for the program of short films and our guest speaker, an intermission with dessert, and more shorts followed by a Q&A with the filmmakers while you vote for your favorite film. The evening wraps with the presentation of the “Audience Favorite” award, and more networking with film pros and invited guests!

Shorts were submitted from around the state, which were then viewed and scored by a judging panel comprised of women film pros in Arizona. The main criteria for the submissions was that at least one of the following key positions was held by a woman - Producer, Director, Director of Photography, Editor, or Screenwriter. A total of 38 shorts were submitted, with the following selected to be screened at this year’s event, in no particular order:

While this is a "don't miss" night for ladies, men are also encouraged and welcome to attend.

The Arizona Production Association presents the 5th Annual “Ladies ‘Film’ Night Out” on Friday, November 16, starting at 5:30 pm at the Scottsdale Center for the Performing Arts, 7380 E. Second Street in Scottsdale.

Tickets are $30 for the general public in advance, $35 at the door; $25 for APA Members. Admission includes a buffet of hot and cold appetizers, the guest speaker, the film screenings, fabulous dessert items, a filmmaker Q&A and YOU. APA MEMBERS - check your newsletter for your ticket discount code.

This event SOLD OUT in prior years, so get your tickets now! Tickets are available online at: https://www.brownpapertickets.com/event/3745675

For  more info on the shorts:  https://azproduction.com/2018-lfno-short-selection-details